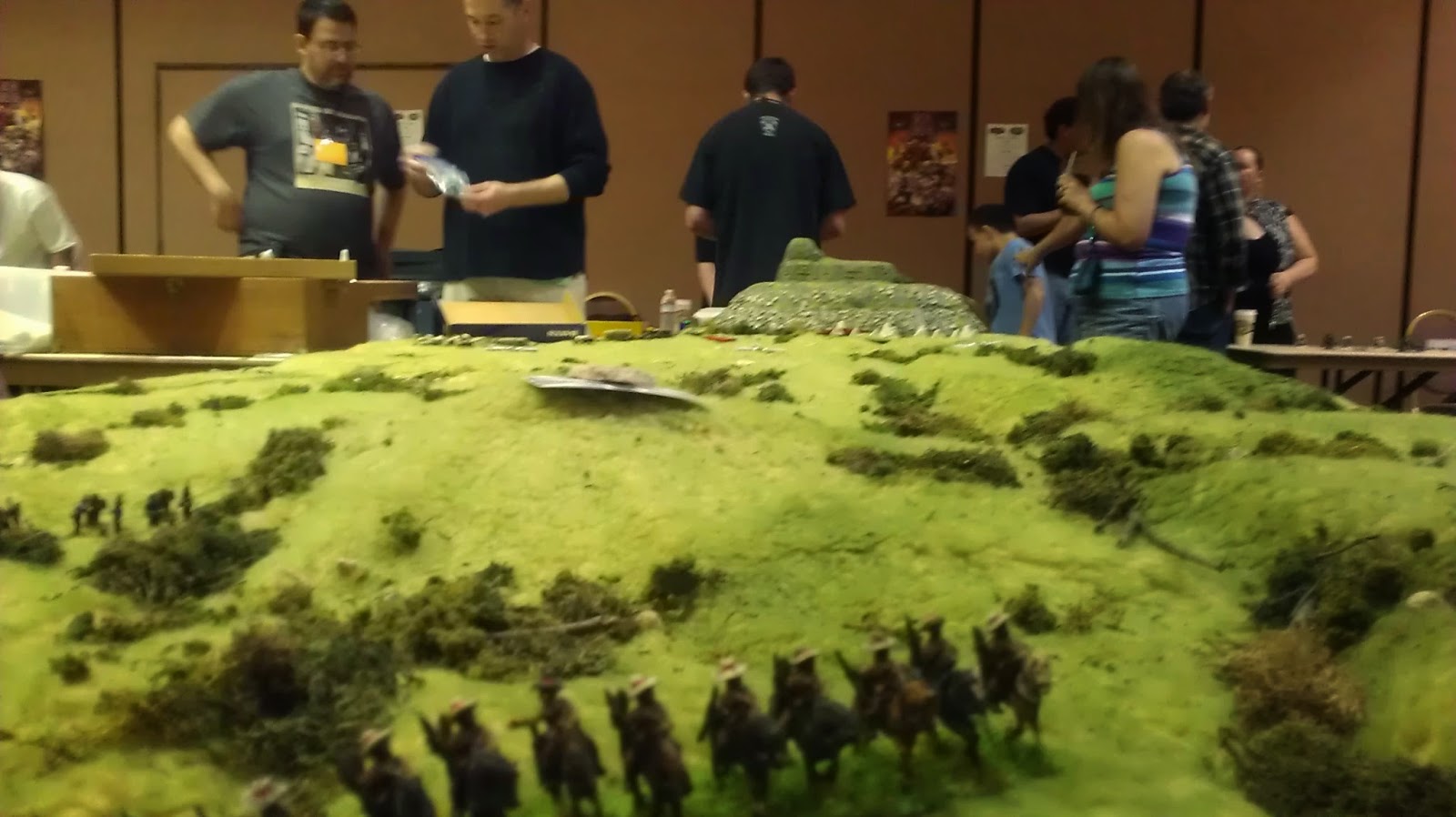 The opening situation has Colonel Durnford deployed off table while scouting for elements of the Zulu army. Raw’s troop while chasing cattle being herded by udibi boys stumbles across the Zulus resting in a valley on the Nuqutu Plateau. Nearby Major Russell with an escort of a company of NNC begins to ascend Conical Hill looking for Raw’s troop. Firing erupts as Raw withdraws back over the ridge and with the Zulus close behind. 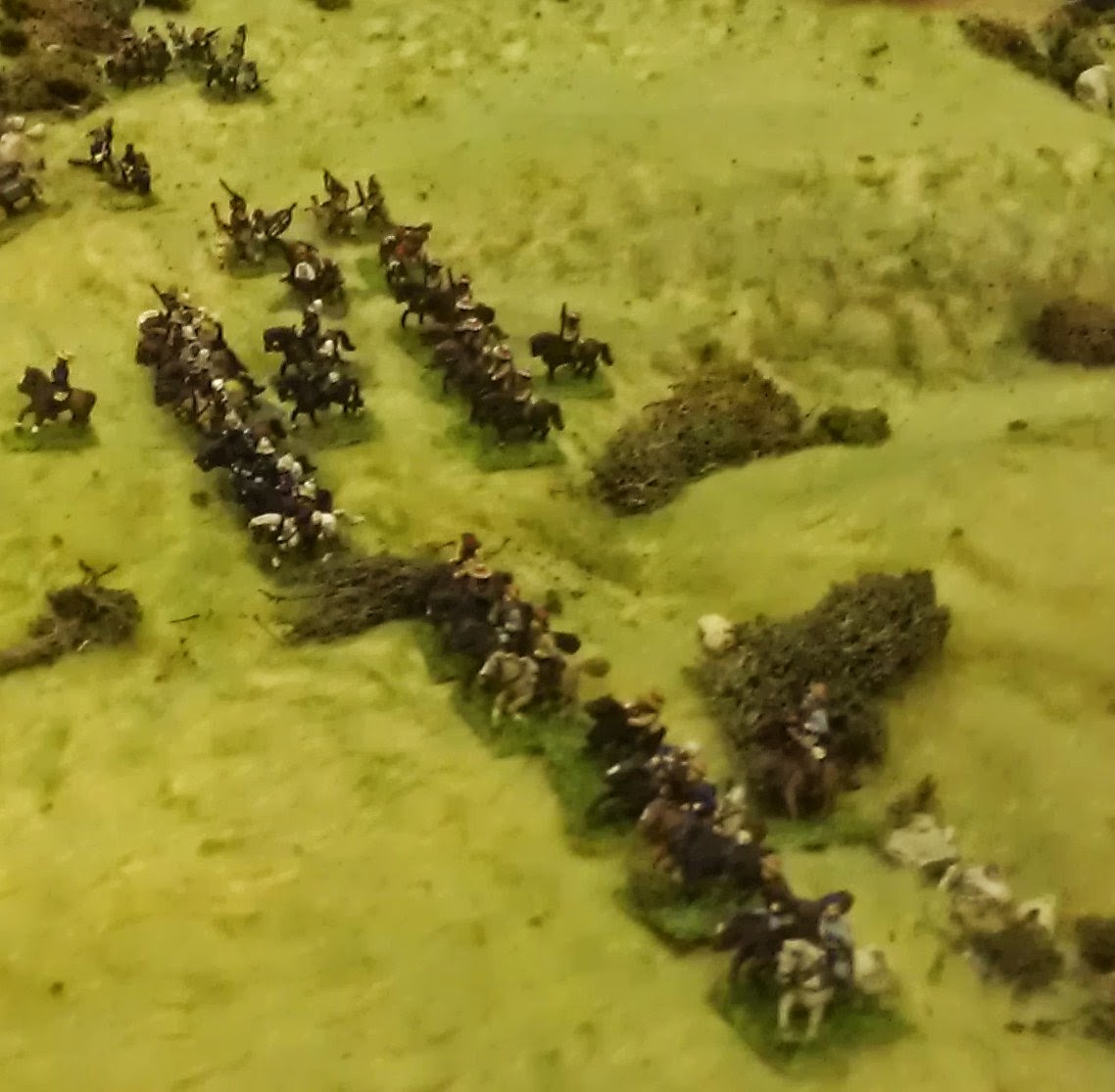 Seeing this, the Rocket Battery and its escort turns tail and flees back down the slope toward the British camp and safety. Colonel Durnford, meanwhile begins to backtrack toward the British camp as he and his troops see Zulus swarming up on top of the Ridge to their north. Raw dismounts his command in the Donga just past Conical Hill and begins firing at the Zulus as they crest the ridge and the top of Conical Hill. The Zulus slowly begin to deploy into battle formation as the shots from Raw’s men drop several Zulus apparently with little or no effect. 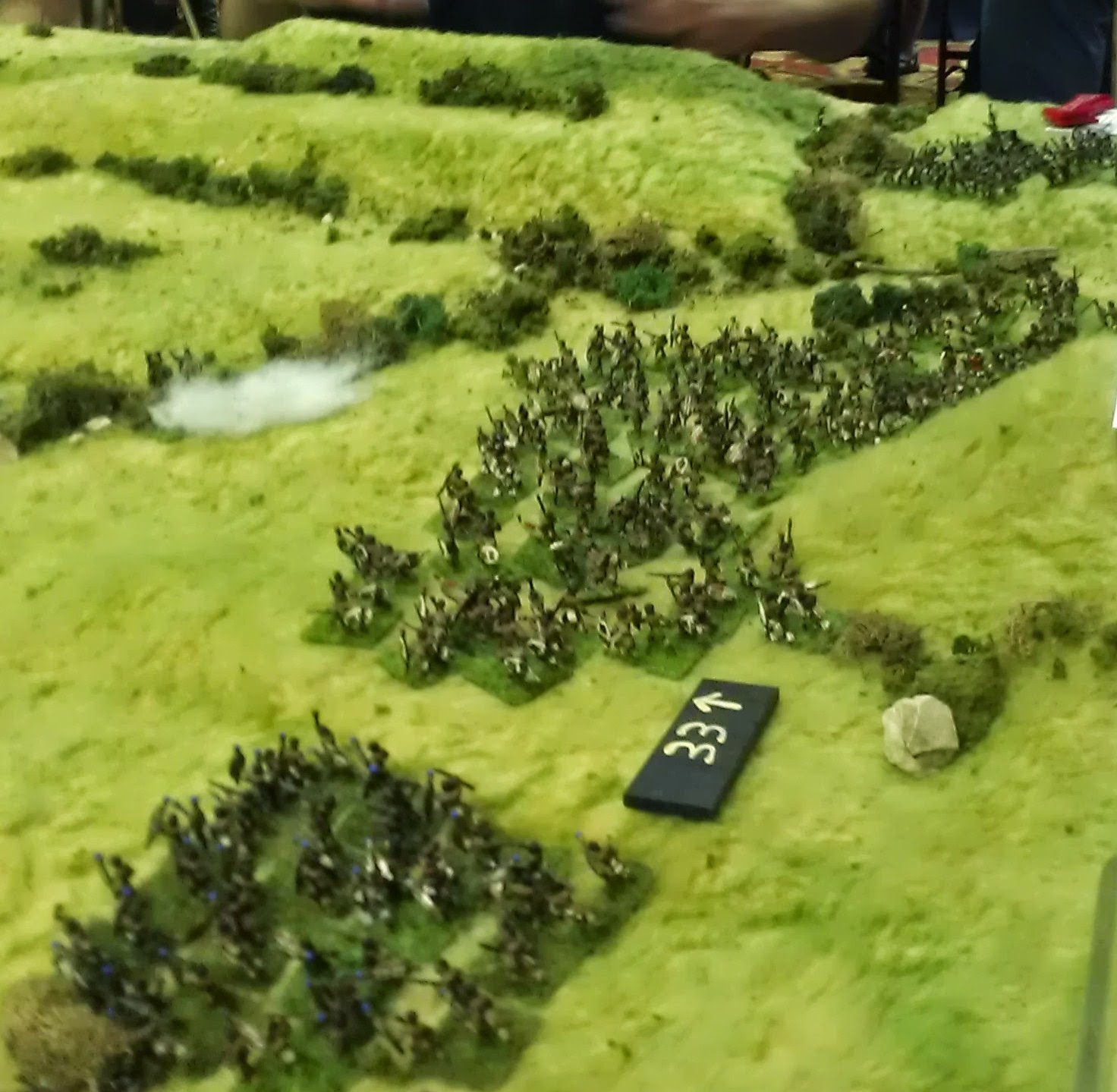 Colonel Pulleine meanwhile has ordered 2 companies to secure the ridge line on his left flank while the rest of the command stands to. On his right the NNC stirs and begins forming on the right flank in front of Blacks Koppie. The British artillery limbers up and prepares to move into position cutting a path through the NNC as it forms along the ridgeline. 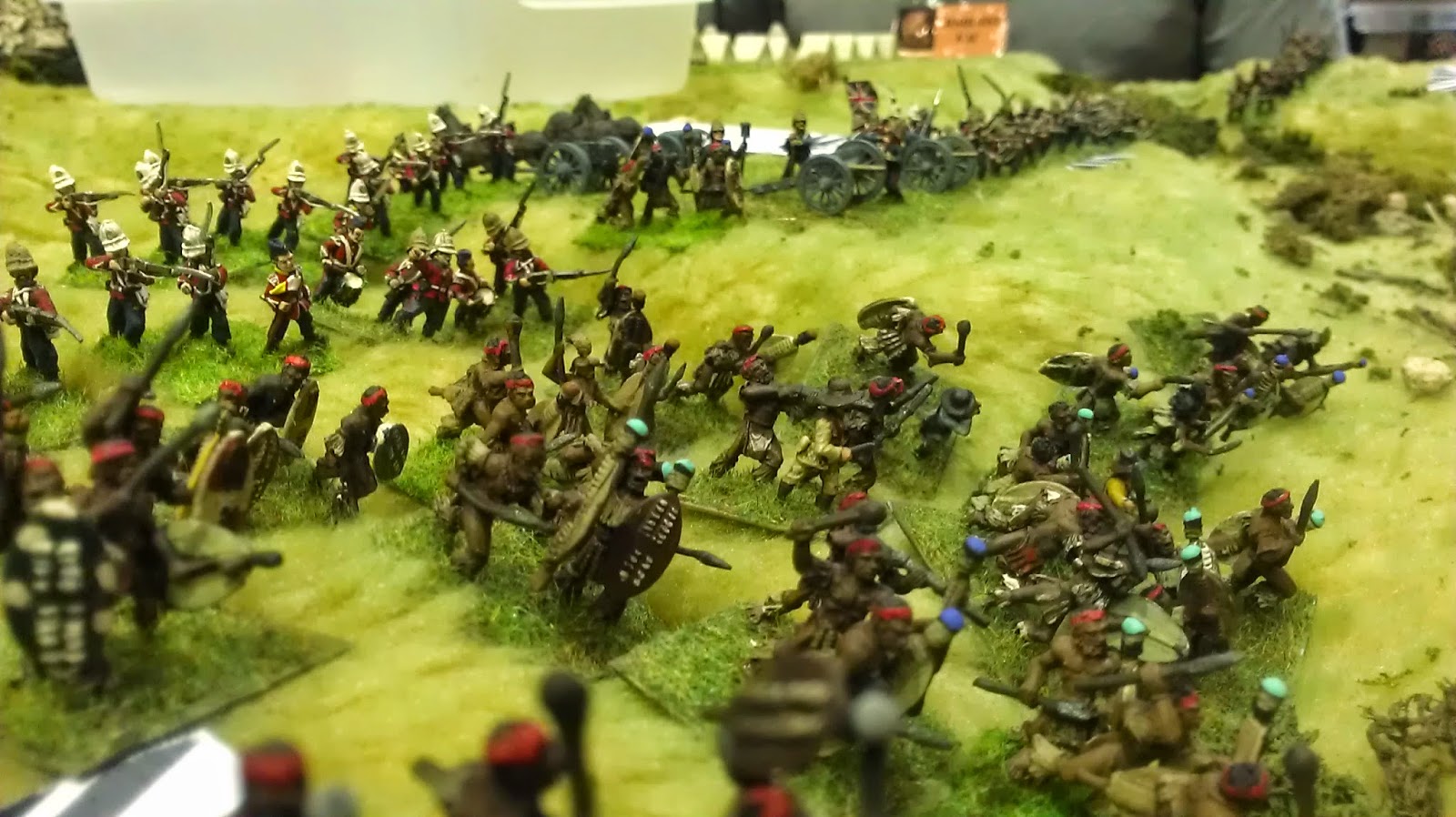 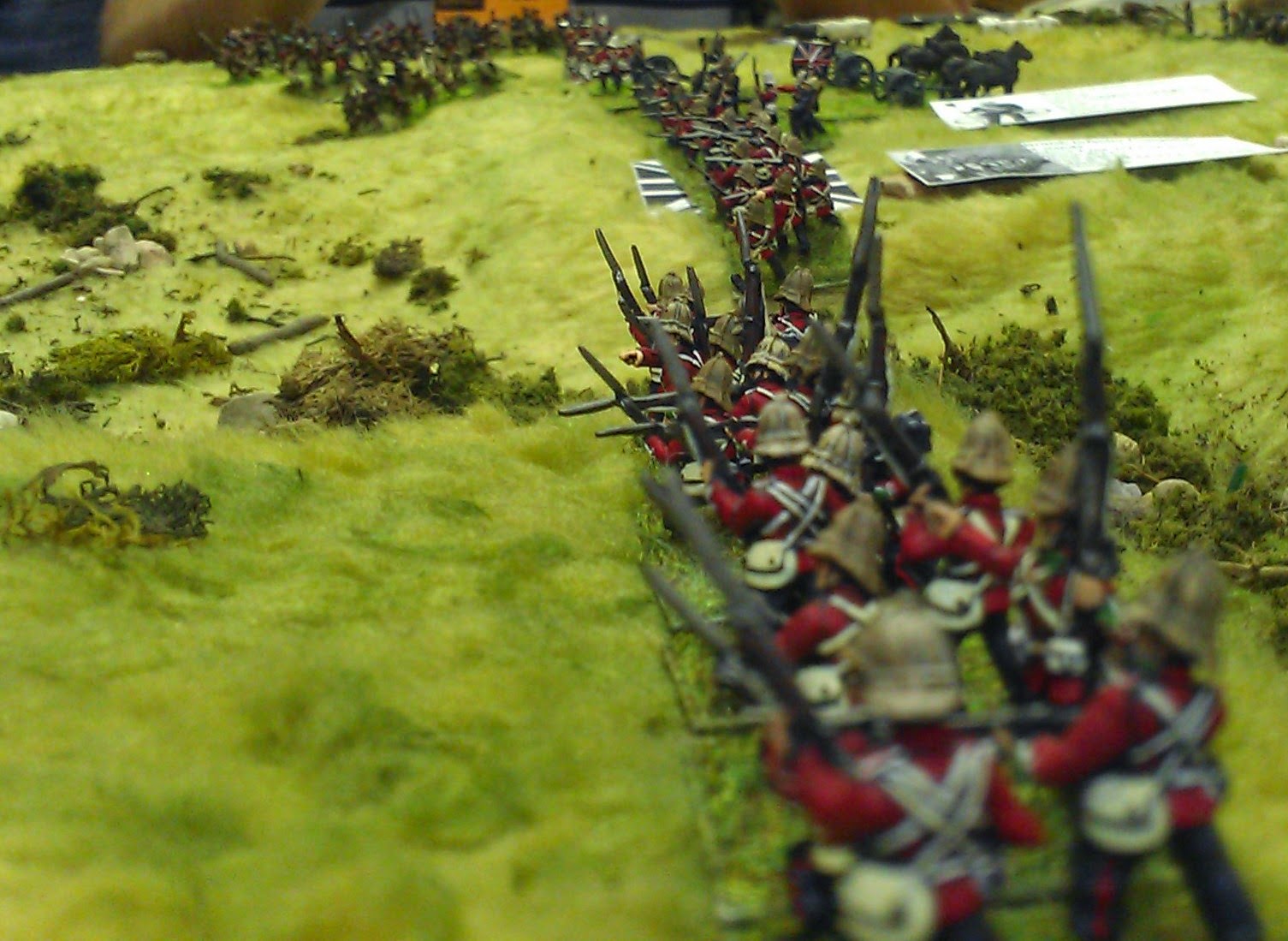 Raw meanwhile is facing a severe predicament as he is facing several Ibutho’s of Zulus which are steadily advancing down from the height of Conical Hill and along the Dongas Northwest of it.Under heavy pressure Raw continues to hold whilst Durnford extracts his command farther to the West towards Pulleine. 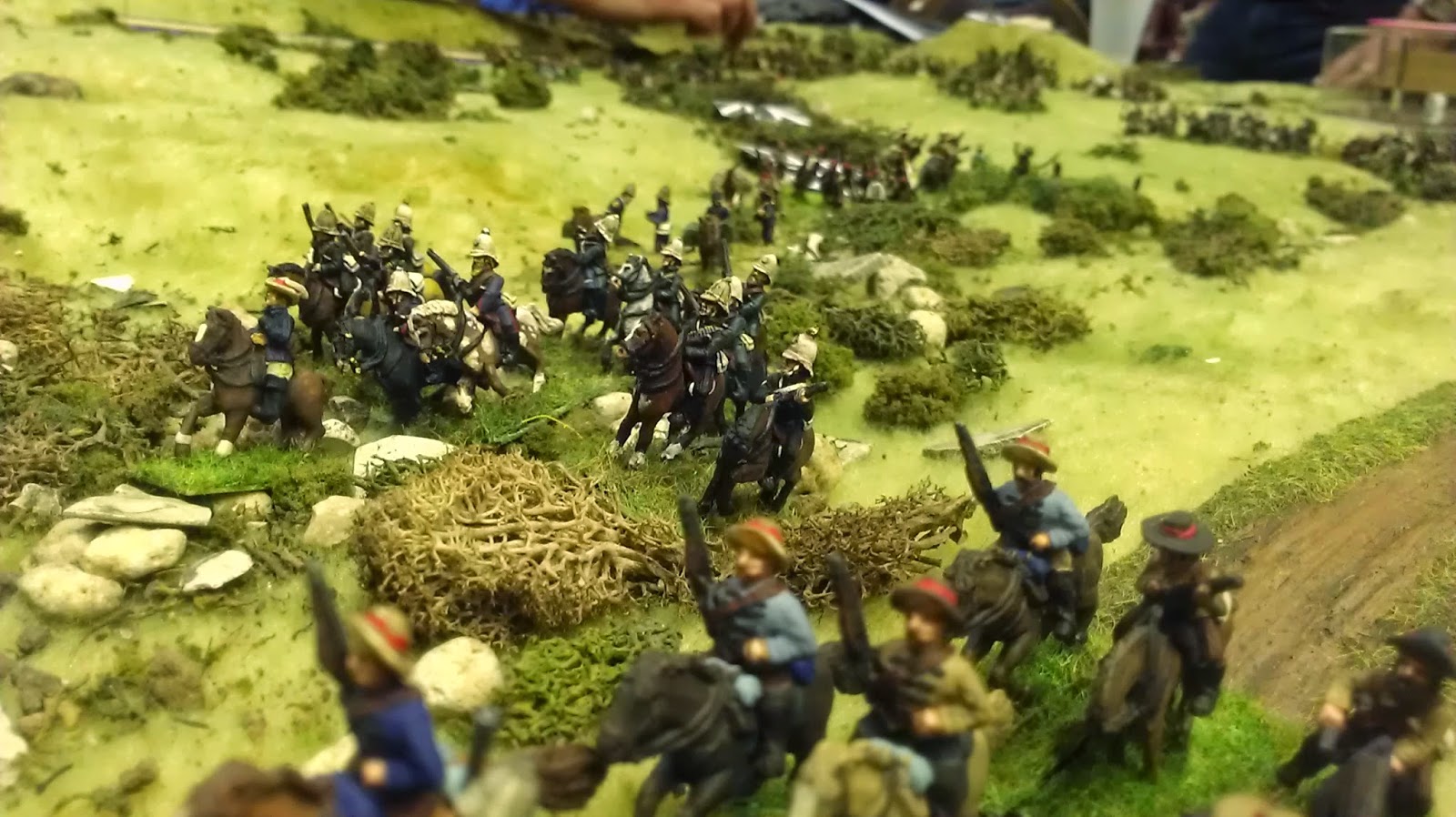 As Durnford passes the Donga, Raw continues to fire on the Zulus covering the Rocket
Battery and the NNC trailing behind Durnford’s cavalry. The Zulus charge the troopers and
at the last moment and Raw’s troopers retire toward the camp closely pursued by the Zulus.
The Zulus full of bloodlust pursue so closely that Pulleine is unable to bring fire from his now
formed battleline against the pursuit. 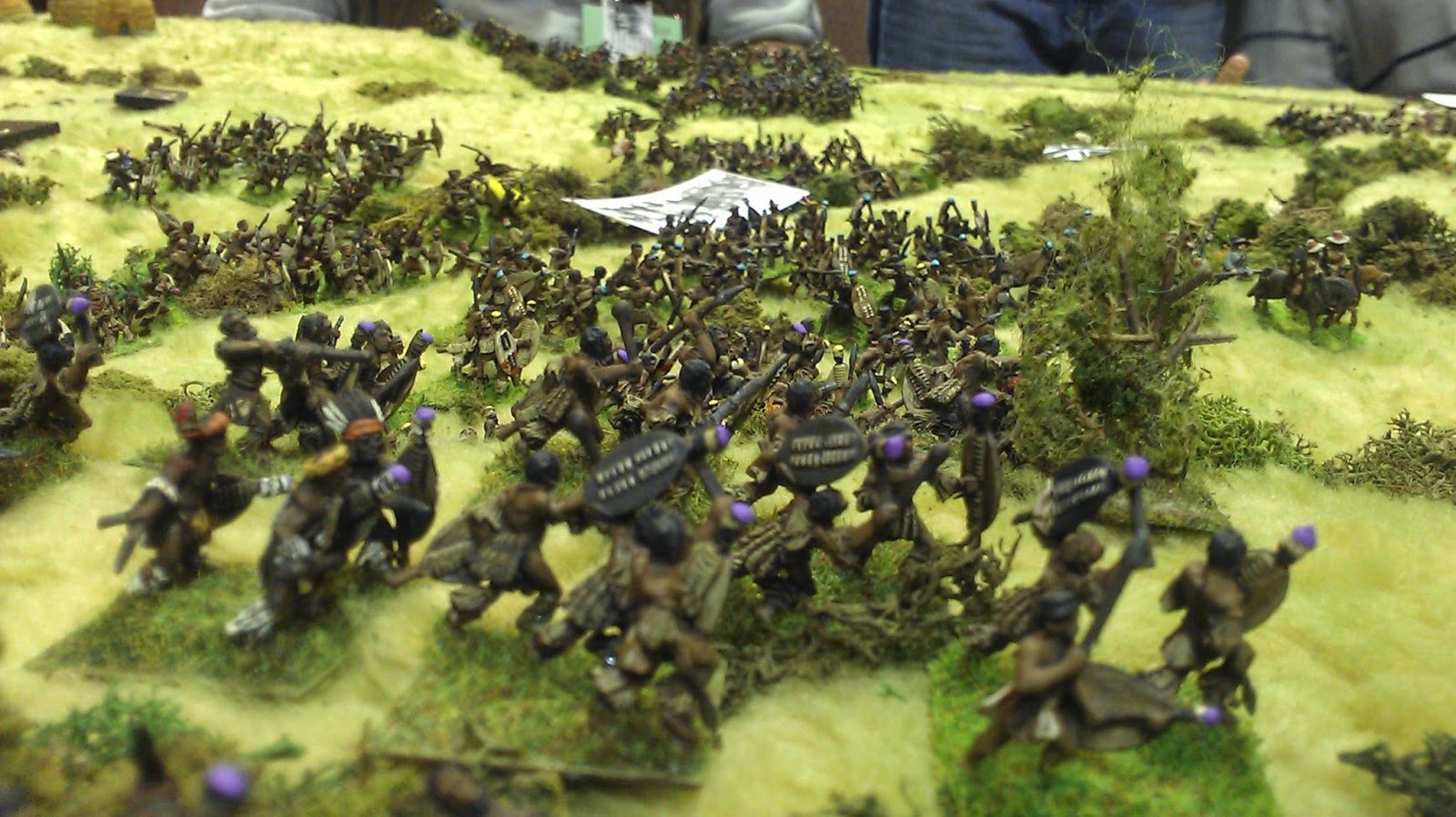 Pulleine his battle line formed realizes that the Zulus are attacking in strength and begins what
long range fire he can bear on the Zulus without endangering Durnford’s command.This will
have a profound effect on the outcome of the battle.

Durnford finally gets his command into position on the far British right flank just in time before
the Zulu Left Horn closes with his command. Meanwhile on the British left, the Zulus catch up
with Raw’s troop and maul it and drive the few survivors up a draw a mere 200 yards
from the British line. 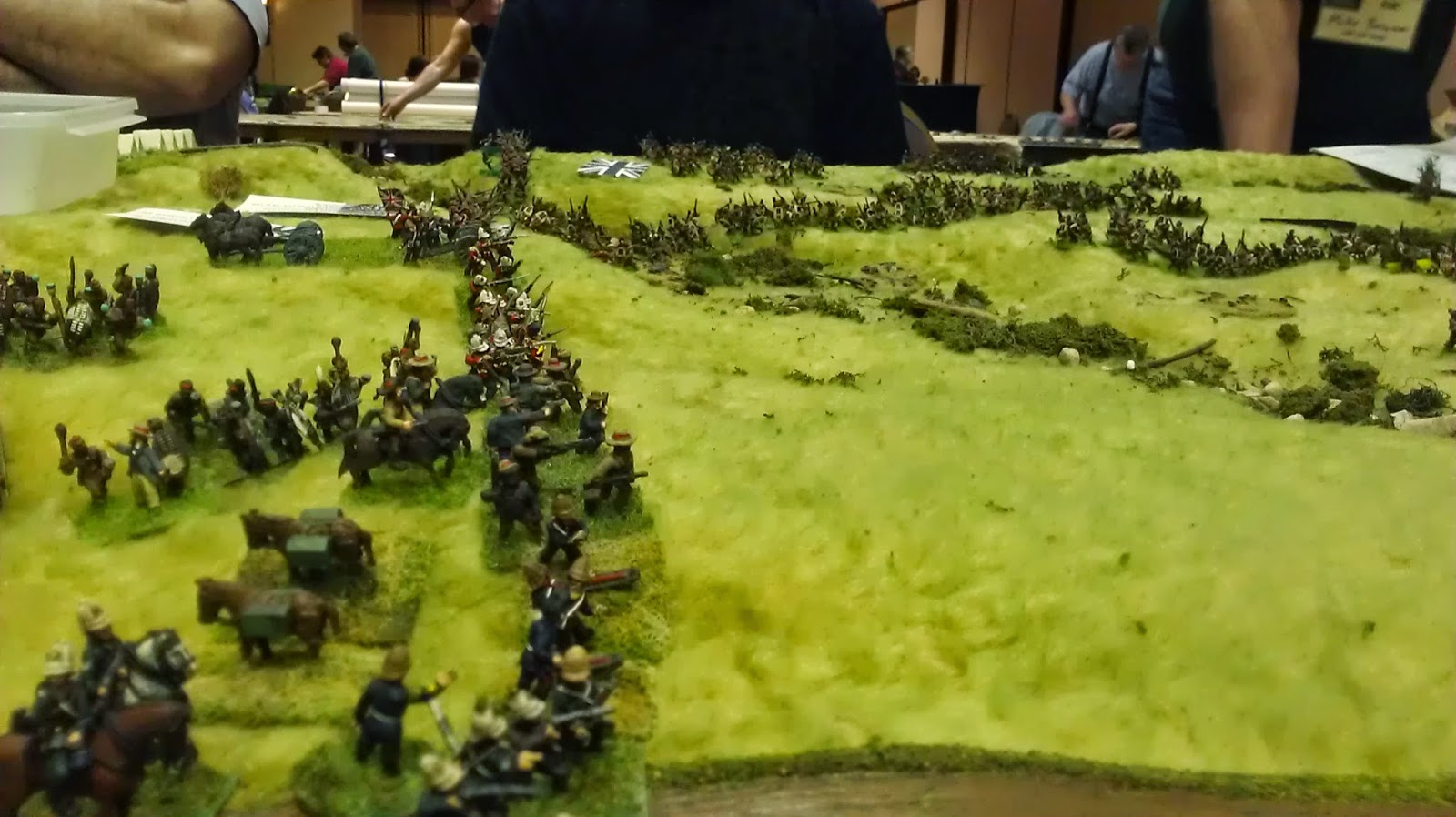 The troopers scramble to safety but mask the rifle fire of 4 companies of British infantry
which allows the Zulus to pour into the Donga in front of their position. All along their front
Zulu masses surge forward to engage the British line. The British rifle fire and cannon shot
tear huge gaps in the oncoming wave of human flesh. Pulleine holds firm as the Zulus attempt
to pierce his line.The Zulus in the Donga surge forward and engage the British infantry on the
slope above them and a intense melee erupts with neither side gaining a clear advantage. 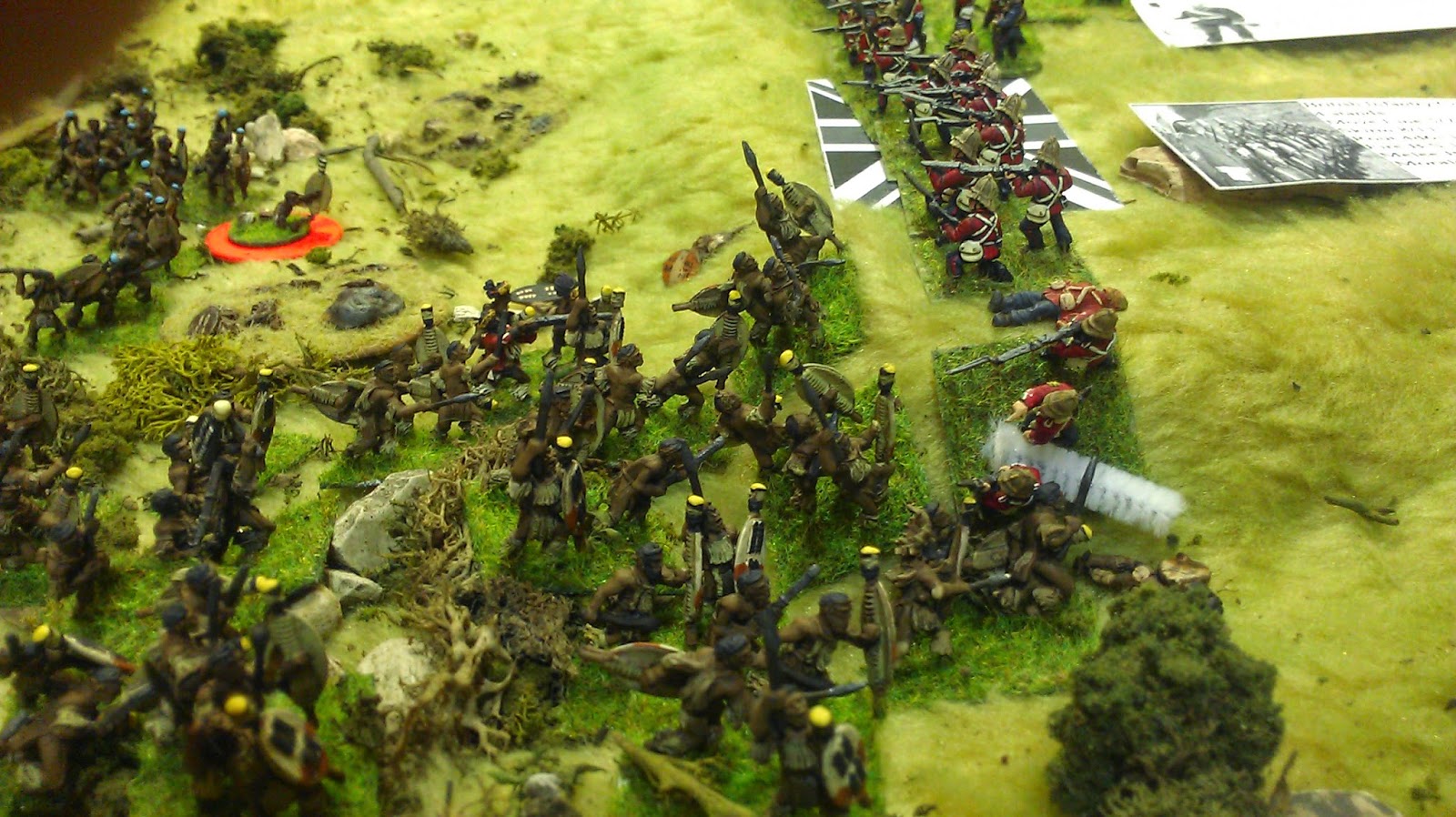 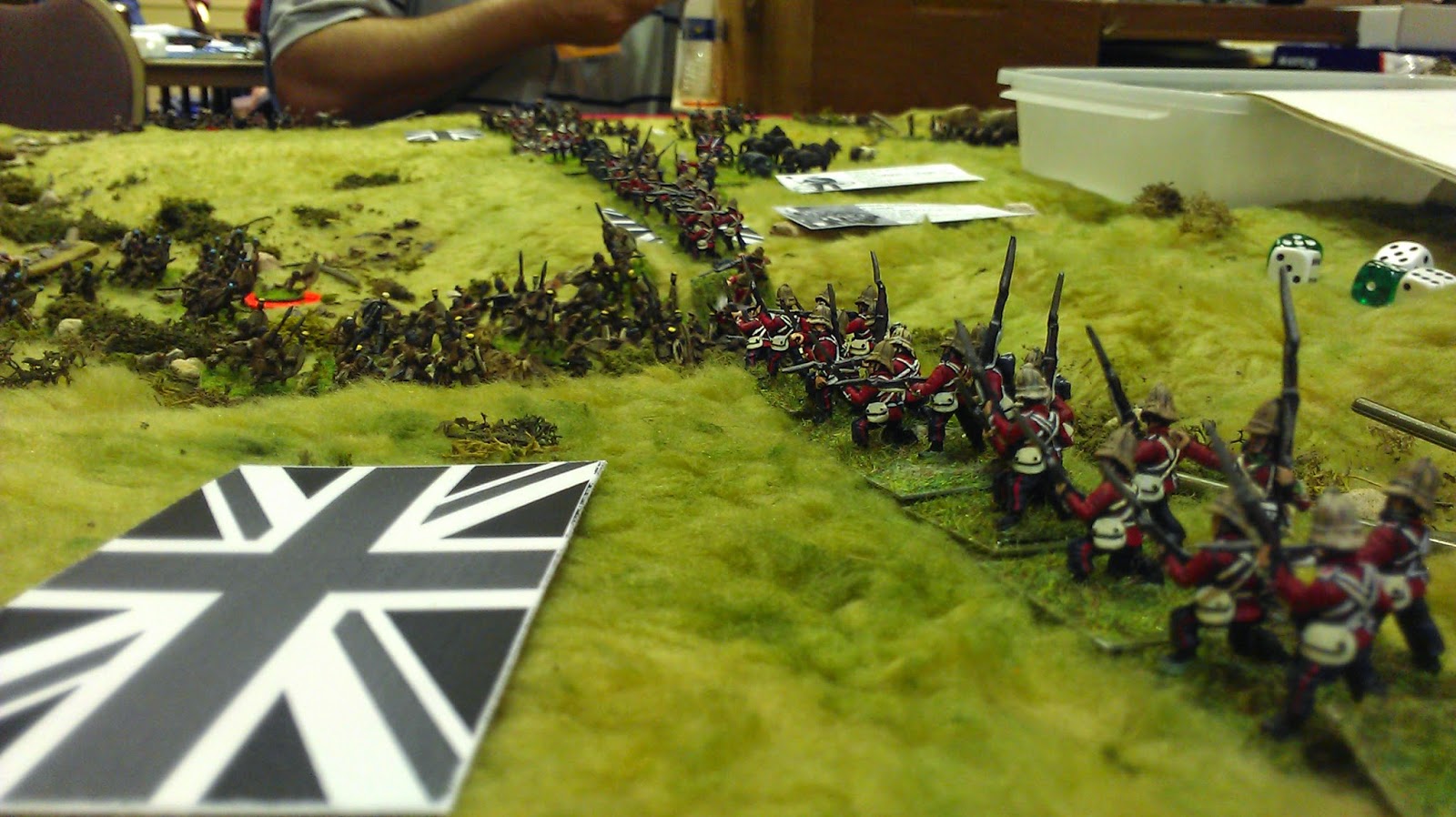 The British line holds for the moment but many Zulus make their way into the donga on the British left and begin to close on the supporting infantry companies. Suddenly the Zulus commit their reserves and increase pressure all along the line. Heavy rifle and cannon shot fells many Zulus and routs several Ibutho’s but they still advance. The 1/NNC steady until this time start to waver and this coupled with a sudden ammunition shortage amongst several units along the line is all they can take and they break leaving a gap in the British right which Durnford desperately tries to plug shut. 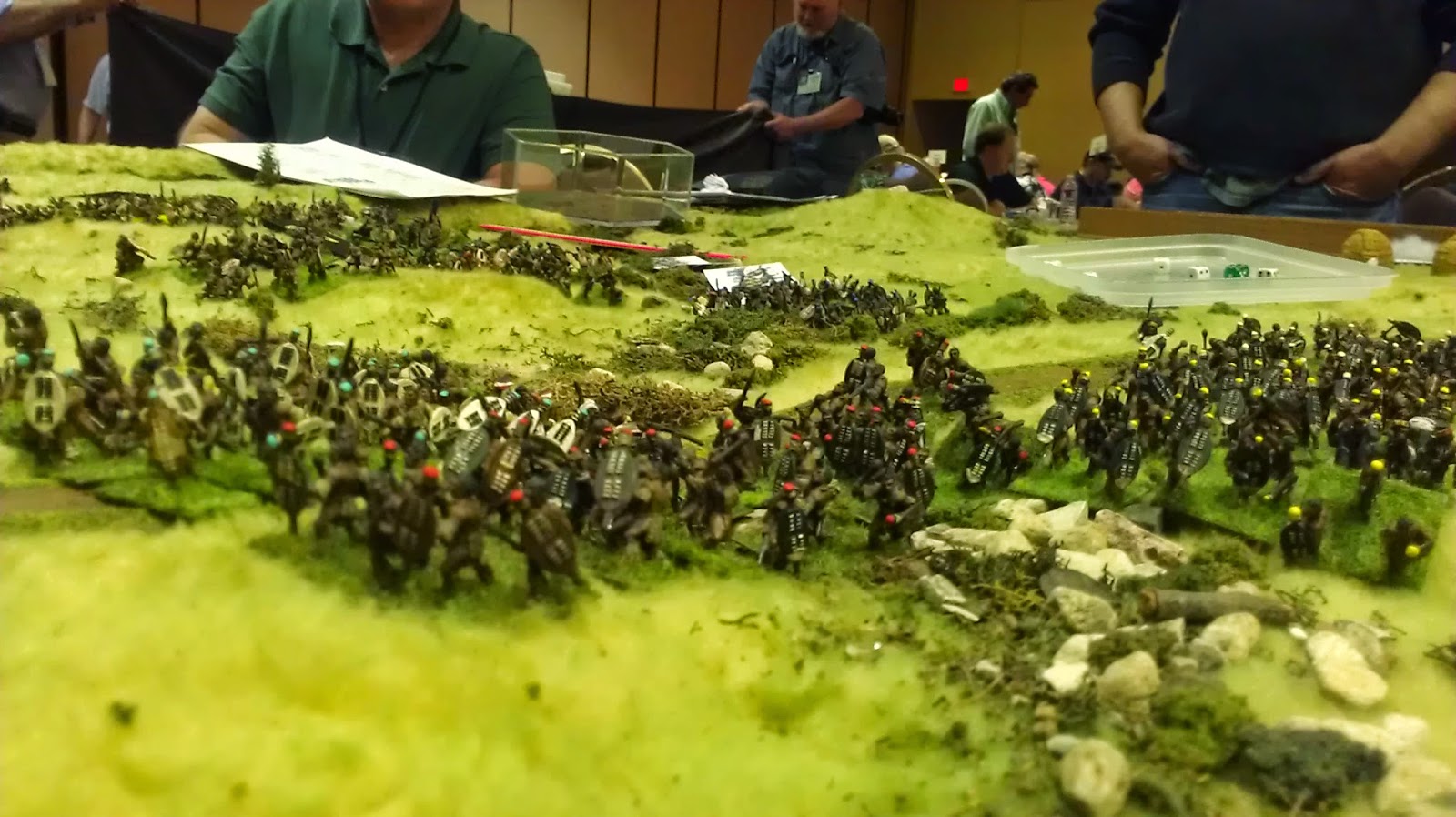 On the British right faced with ammunition shortages and close contact with the Zulus the full weight of the Zulu force bears down on the British and after heavy fighting they wipe out one infantry company and send another fleeing into the British camp hotly pursued by the Zulus. 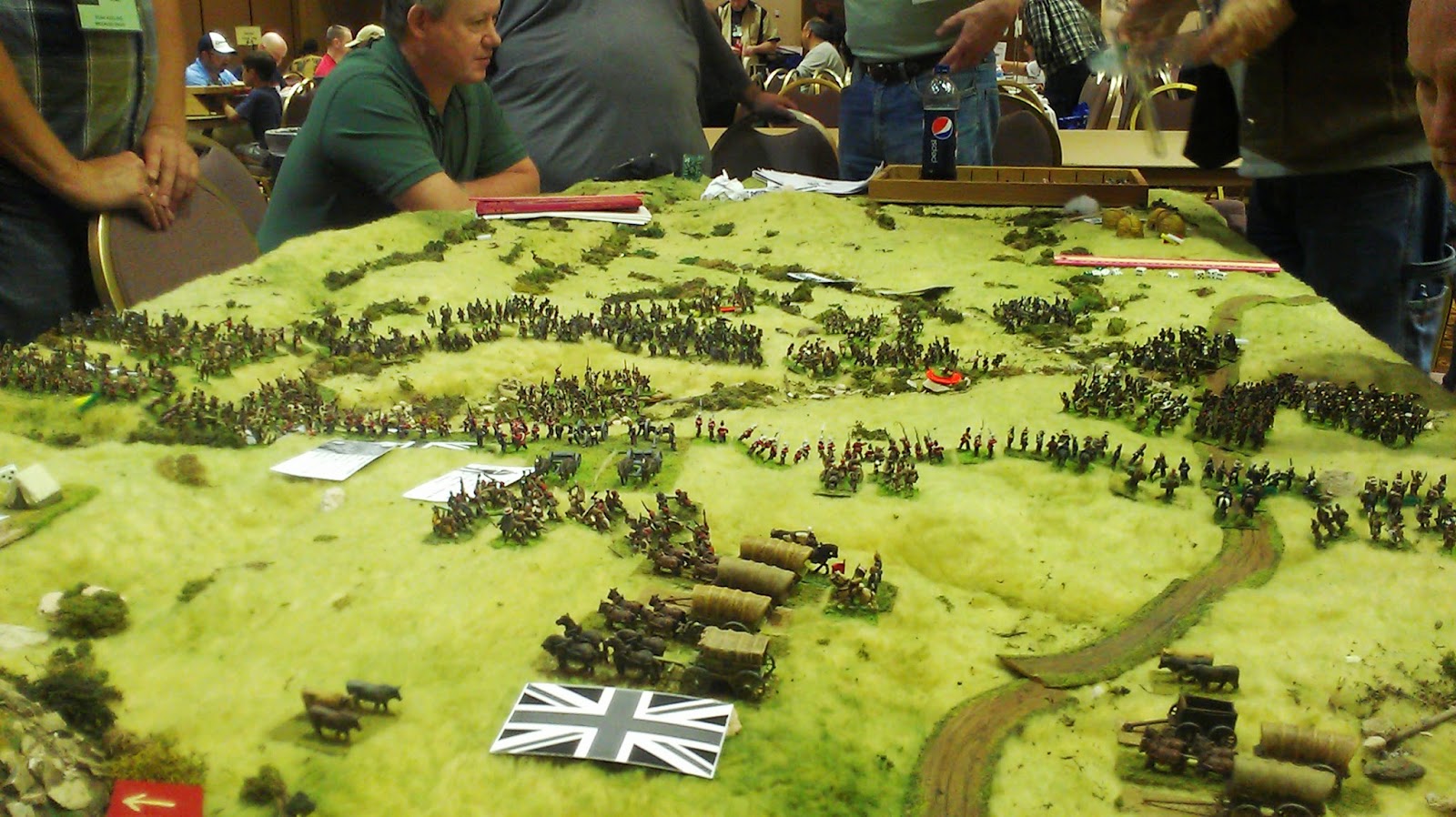 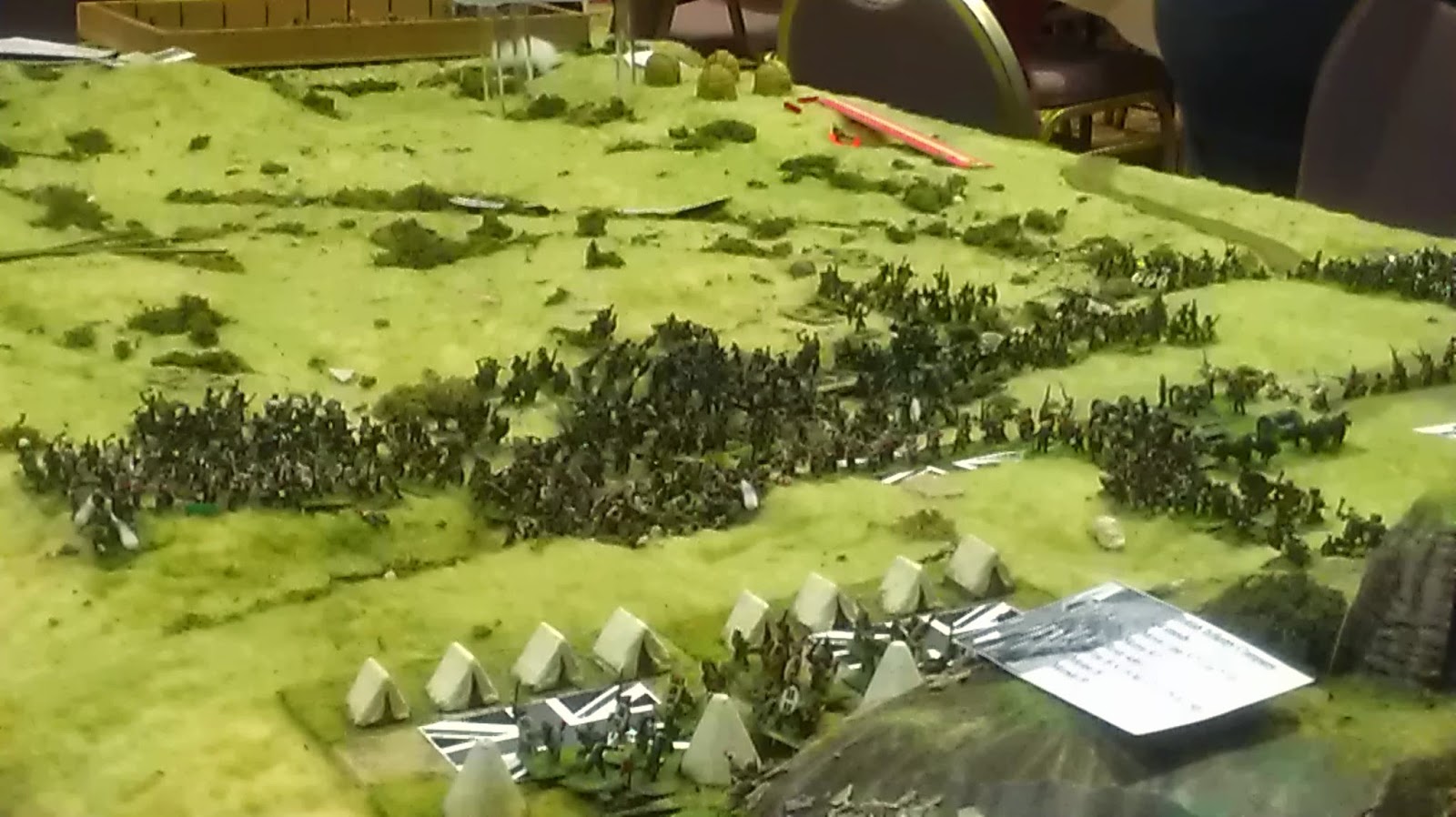 Once in the camp the Zulus on the British right launch their final assault and overrun the British infantry and cause the remaining NNC companies to flee. Durnford tries to hold the line but is forced to withdraw as the Zulus pour out of the tents and attack Pulleine from behind capturing the British Colours after wiping out the Colour party led by Pulleine. The remaining infantry form rallying squares and fight to the last near the guns and along the ridge until finally overcome by superior Zulu numbers. Durnford and the few survivors escape across Fugitve’s Drift back towards Rorke’s Drift.