The Battle of the Notch
25 August 1950
Pusan Perimeter

We played a Korean War scenario this weekend using Cold War Commander ruleset based on the defense of Pusan by the 8th Army and ROK units.

The U.S. 1st Bn 24th infantry Regiment was tasked with guarding the “Notch” a railroad cut in the Taebek mountains which would allow the NKPA to drive on Pusan and end the war. The First Battalion was under strength consisting of 2 Rifle companies and missing its Weapons Company . To make up for these shortages the Battalion was backed up by a platoon of tanks of the 89th Medium Tank Battalion and Corps level artillery and air assets. Initially, the Battalion deployed one company each in the village of Bonsong and a farm complex east of the town. The commander had his infantry prepare fighting positions and settle in for the night well aware that the NKPA was reported to be roaming around in the hillsides above the town. 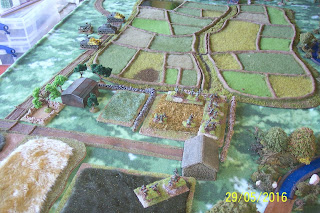 The members of K Company settle in for the night unaware the NKPA was on the move and that they would figure prominently in the fighting that would soon erupt.

Meanwhile in the hills above the position The 3rd Bn 16th Regiment of the NKPA 4th Infantry Division watched from their positions as the decadent Capitalists dug in for the night awaiting the signal from Colonel Mao to begin the glorious offensive. Mao’s plan was simple send one company in a flank march deep into the rear of K Companies position while sending 2 companies forward under the cover of the foliage growing along the stream north of the U.S. position to launch a frontal attack once the flanking company began its assault. The attack would be supported with  heavy machine guns and mortars of the Weapons Company sited along the ridge north of the Objective. The night was clear but due to command delays only one company was able to move into position before the flank attack struck the rear of the U.S. position. 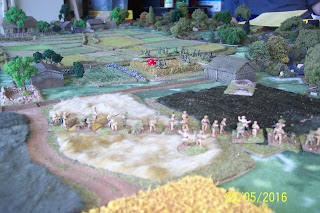 NKPA forces strike the rear of K Company taking it be surprise and destroying several squads.

K Company still in their sleeping bags and taken off guard was unable to return fire before the NKPA fell upon them and were hard pressed to stem the onrushing tide of the NKPA assault force. The commander ordered his men to regroup but caught in the heavy crossfire between 2 NKPA companies; the company suffered heavy casualties and quickly fell apart some surrendering and a few survivors scrambling for the rear. Filled with Revolutionary zeal, Colonel Mao committed his reserves to exploit this sudden opportunity for fame and glory. 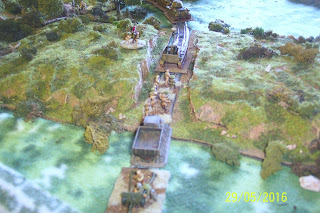 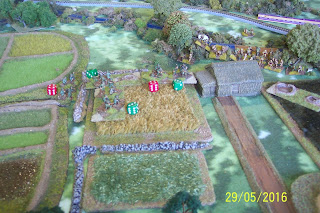 K Company starts to fall apart from the NKPA steamroller 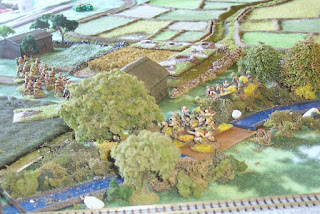 NKPA infantry advance over K Companies vacated position capturing many U.S. soldiers many were later found bound and shot after the battle.

Meanwhile The U.S. Battalion commander called for his armor reserves and requested air support to stem the gap made by K Companies sudden vanishing act. The air support was first to arrive in the form of a sortie F 51 Mustangs which launched low level strafing attacks against breakthrough. The 76mm fire from the Shermans forced the flanking NKPA infantry to take cover in Company K's recently vacated foxholes. Overhead U.S. aircraft start to gather as Colonel Mao drives his T34’s across the railroad trestle to confront the Shermans pummeling his infantry. Unfortunately, the Shermans score their first kill on the tank Col.Mao's is riding on and he is blow to the celestial heavens stalling the armored attack at the worse time. 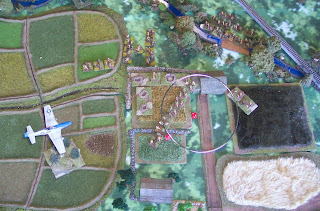 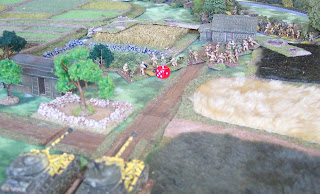 The Shermans arrive and drive the NKPA infantry into the abandoned foxholes. 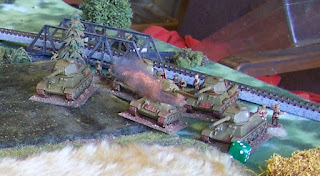 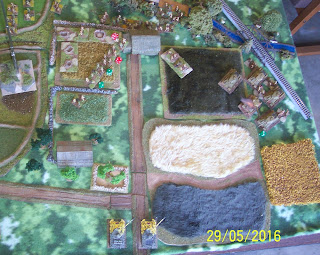 Tigers have T34's for lunch 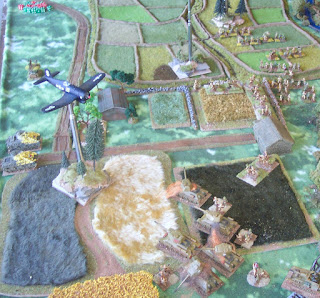 A few good marines do their part 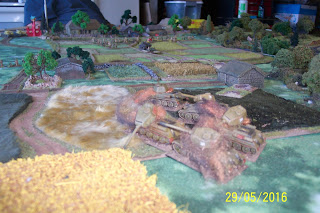 Overhead the sky's unleash a torment of aerial activity led by the presence of a observation plane directing the attention of 155 mm Battery which focuses their fire onto the now large target of NKPA infantry sloshing across a rather large group rice paddies toward the defenders of Bonsong. Despite a peppering of artillery and aerial bombs the NKPA infantry shruggs off the damage and drives on across the paddies supported by the fire of mortars and heavy machine guns from across the stream directed at the defenders lining the paddy berms east of the town. During the attack a lone F 51 Mustang mistakes the U.S.Battalion staff truck for a NKPA truck and strafes it killing the U.S. Battalion commander. The aerial Observation plane notices the heavy weapons firing on the town to the North and flies closer to better direct counter battery fire on the target. Big mistake the plane is shredded by AA Heavy machinegun fire and spirals off crashing into the trees. 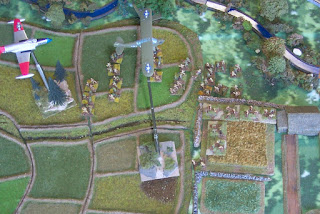 NKPA infantry prepare to take a beat down from the F 80 jets and accurate 155 mm artillery fire. 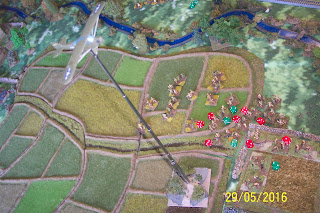 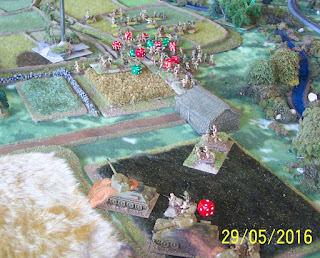 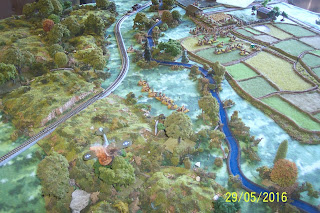 The Shermans lacking prey after their lopsided victory over 5 T34/85's and 1 SU 76 drive off toward Bonson and flank the NKPA infantry in the paddies bringing fire to bear in a vain attempt to halt their advance and after several minutes they continue on to the town to defend the road exit south of the town. 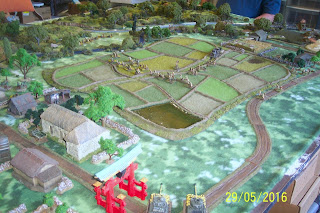 Undeterred by the incoming fire with support from their heavy weapons, the NKPA resolutely advances on the town in Battalion strength. The defenders despite  their best efforts and suffering heavy causalities are forced to withdraw from the field. The road to Pusan is now open. 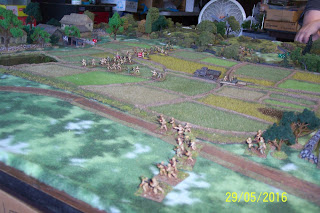 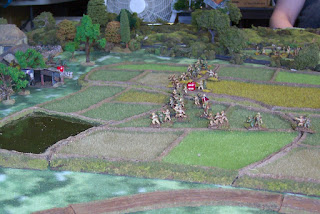 NKPA infantry close in on the town as the U.S. forces withdraw.

Posted by chuckazulu at 11:53 AM No comments: