Deployment
Mexican Deployment
General Ortega deployed his Division center on the road intersecting Casa Pedro with the 1st Infantry placed along the stock corral fence fronting Casa Pedro on the Mexican left flank. Astride the Road Ortega placed his 4 pdr gun battery with Tuco’s Bravo Militia Battalion deployed to right side of the road along the stone wall enclosure protecting the grain field. Supporting Tuco’s troops were the troops of the San Geronimo Militia Battalion in reserve to the rear and right of the grain field. On the extreme Mexican right were Esteban’s and Figueroa’s Ranchero’s led by Gen. Canales the legendary “Chaparral Fox” 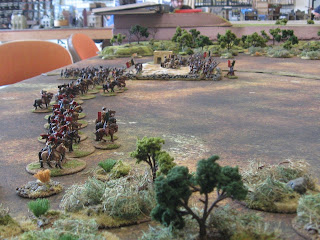 Colonel Smith receiving reports from the Texas Rangers attached to the Dragoons of the presence of the enemy deployed  across the road and ready to give battle quickly deployed from road column on to plain to the right of the road with the 7th U.S. Infantry on the right  in open order line with Mackall’s Battery in the center of the line supported on its left by the 5th U.S. Infantry with the 1st Dragoon’s and Rangers formed in column on the road ready to deploy if needed. 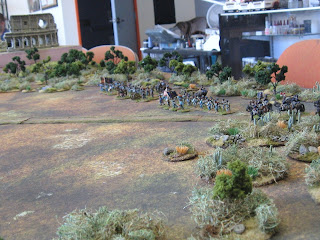 U.S. forces prepare for the battle to come.
Opening phase
Colonel Smith noting the Mexican deployments holds in place and directs Mackell’s Battery to commence fire on the Mexican line to soften up the enemy infantry prior to launching an assault. The Mexican Artillery returns fire under expert direction of Captain Jorge and quickly dismounts one of Mackell’s guns. General Ortega then orders Canales to launch an attack upon the infantry supporting the America artillery and to cover the charge against the U.S. Dragoons on the far right. 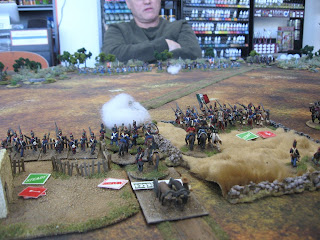 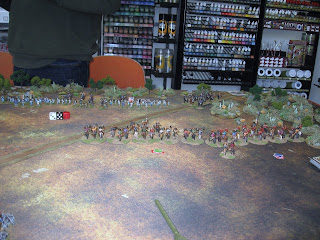 The Infamous Charge of Irregular brigade
Ordering his men into line, Canales advanced steadily toward the 5th U.S. Infantry with Esteban’s ranchero’s quickly covering the distance and Figaro’s rancheros preparing themselves to countercharge any threat from the Dragoon’s and their Tejanos lackeys. Esteban’s men closed the distance before the  dreaded Americano Artillery could bring their guns to bear while the Americano infantry stood there dumbfounded as his loyal Ranchero’s leveled their lances and charged home. At 50 paces the Americano line erupted in a sheet of flame and men and horses were soon falling and writhing in agony on the ground. Esteban could only see scatter bands of his Rancheros riding pell-mell back past Figueroa’s men with all semblance of order given way to fear and panic at the devastation wrought by the Americano line. Their attention fixed on the flight of Esteban’s men, Canale's command didn’t realize that the dreaded Americano artillery redirected their fire upon Figueroa’s Ranchero’s. A well placed shot caused panic amongst the ranks and they too fled to the rear despite the exhortations of their general. 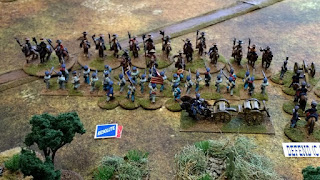 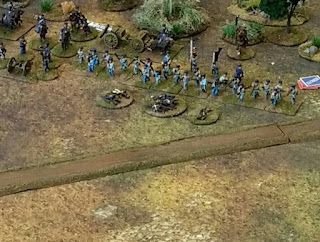 “The Ranchero's advanced in groups of riders until almost upon our bayonets, Our volley emptied many saddles and the rest took flight as fast as their small horses could carry them”
Lt. Hall 5th U.S. Infantry

The U.S. Dragoons and the Rangers spurned their mounts forward following the rapidly retreating foe and preventing any attempt by Canales to rally the fleeing wreck of his command. 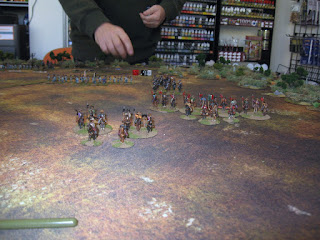 With the rout of the Mexican cavalry Col. Smith orders a general advance against the enemy battle line. Mackell’s battery begins to concentrate fire on the Tuco’s Bravo Militia Battalion with telling results despite the cover from the stone wall casualties begin to mount. 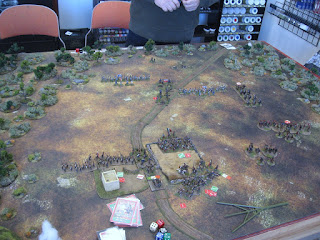 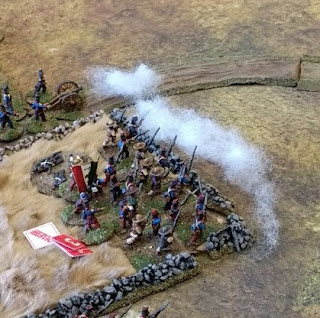 Captain Jorge’s battery knocks out a limber from the battery until forced to change targets to slow down the advancing infantry. On the Mexican Left the U.S. 7th Infantry advanced under the fierce fire of the Mexican Artillery with gaps appearing in their lines. In the Center the Mexican artillery continued to pound the 7th Infantry whilst Mackell’s Artillery blew large gaps in the Bravo Battalion’s line. General Ortega personally leads the San Geronimo Militia on the right flank to support Tuco’s decimated Bravo Battalion against the attack of the 5th U.S. Infantry.. 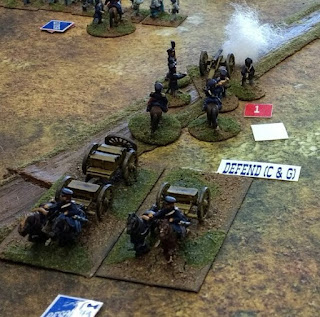 Mackell's Battery pounds the Mexican line in support of the infantry attack.

The 5th U.S. Infantry under Major Scott steadily advanced to within musket range of the Mexican lines exchanging volleys with the defenders alongside the stone wall when suddenly Major Scott was struck by a Mexican bullet which pierced his coat but caused no harm, Scott was reported to have said "It would take a better marksman than that one to fell me, Give ‘em Hell Boys!". 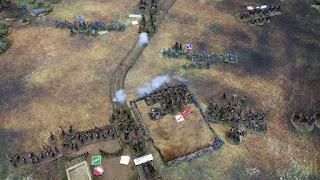 The U.S. battle line advanced under the cover of artillery 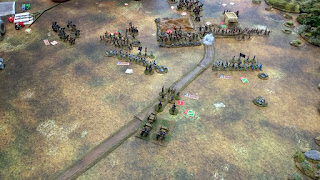 “We advanced steadily facing a torrent of fire from the Mexican line with grape and musketry falling thickly amongst us.”
Private Ezra Washburn 7th U.S. infantry

Meanwhile General Ortega advanced the San Geronimo’s forward against the attack of the 5th Infantry to relieve the pressure on Tuco’s men huddling against the wall under the murderous fire. He observed Canales and his panicked men ride by on his right in disarray closely pursued by the Dragoons and Texans when out of the dust the Dragoons stopped reformed and were preparing to charge his flank. Ortega immediately ordered the Battalion to form square to repel the charge and waited for the inevitable. 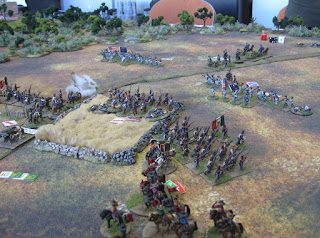 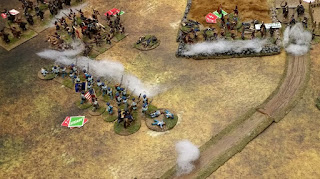 General Ortega’s square is raked by the 5th volleys as the Dragoon’s and Texans prepare to charge.

Meanwhile on the Mexican left General Pino orders the 1st Mexican Infantry to advance against the 7th U.S. Infantry which has suffered heavy losses in its approach. Both side closing to within 50 paces unleash devastating volleys into each other. Despite the losses both regiments hold their ground. 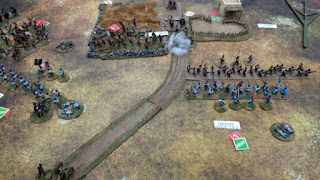 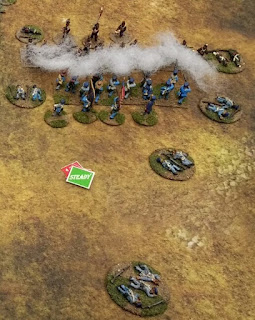 Tuco’s Bravo Battalion under direct artillery and musket fire unleashes another volley at the 5th U.S. Infantry in which a bullet strikes Major Scott killing him instantly. 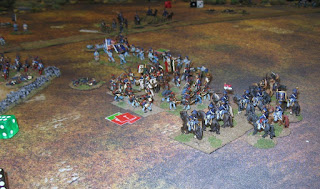 U.S. Dragoons and Texas Rangers charge home
Ortega’s hastily formed square is raked by the musketry of the 5th  opening gaps in the square just as the Dragoons and Ranger charge home which proves too much for the poorly trained militiamen and they break pursued by the Dragoons and wild Texans. General Ortega is mortally wounded and captured by the Texans trying to escape the battlefield,

The militiamen in square fire off an ineffectual volley before breaking and running. 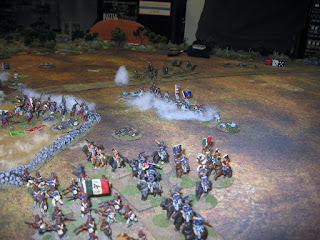 The surrender of General Ortega and the rout of his troops make General Pino realize he had a sudden appointment to get to and he and his staff flee the battlefield leaving behind his brigade to the mercy of the Gods of War. The abandonment of the army by their generals quickly turned the defense into a rout with few escaping. However the losses inflicted on the U.S. forces prevents a active pursuit and nightfall closes in. 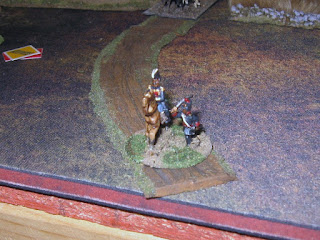 General Pino and staff in all their Glory

Posted by chuckazulu at 6:16 PM No comments:

Here are a few more Infantry units for Gone to See the Elephant Enjoy. 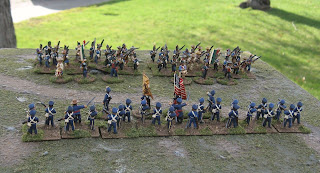 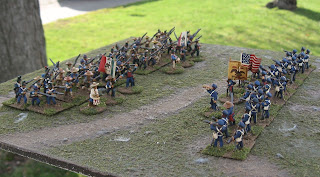 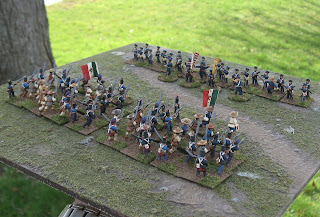 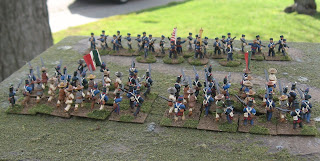 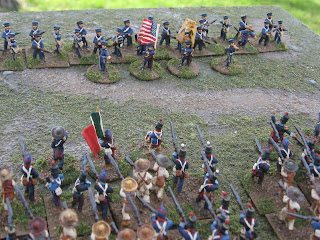 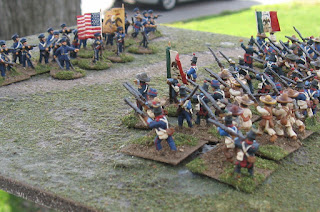 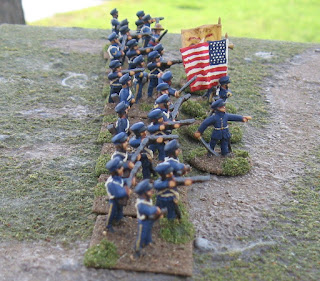 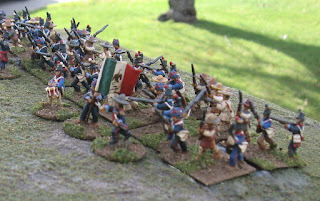 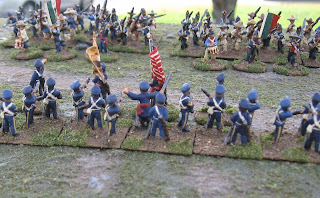 Posted by chuckazulu at 6:11 PM No comments: